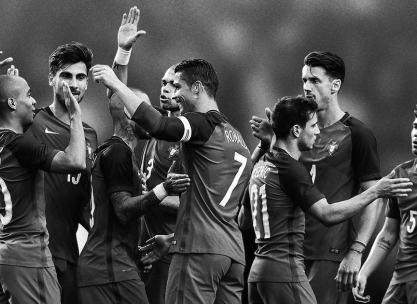 Home advantage has not always been significant at the UEFA European Championship. Only three nations have won the tournament on home turf - Spain in 1964, Italy in 1968 and France in 1984.

The format of Euro 2016 was different to previous tournaments, as it was contested by 24 teams for the first time. 51 matches were shown to hundreds of millions of viewers around the world, giving unparalleled visibility and an opportunity to boost sales for the seven different football kit manufacturers on display.

The big three’s domination of the tournament has grown during the past 20 years. At the 1996 tournament, brands other than Nike, adidas and Puma sponsored 50 per cent of the teams, compared to 17 per cent in 2016.

Growth of Nike
Since 1996 Nike has become more involved in football. It sponsored one team in the 1996 European Championship, compared to six in 2016.

This increasing involvement in the tournament has paid off, as its sponsored teams (France and Portugal) won the two semi-finals against rival adidas (Wales and Germany). adidas sponsored nine teams in total, including the previous European champions - Spain - and current world champions Germany.

Errea: struggled to meet demand
Iceland, with a population of 330,000, was the smallest nation ever to reach a major tournament. The team surpassed expectations and reached the quarter-final, losing against France.

Errea, Iceland’s kit supplier, revealed it struggled to meet the demand for shirts during Euro 2016, especially in Scotland after Iceland knocked England out of the competition.

Home nations
The UK was represented by England, Wales and Northern Ireland. Wales, which secured its first qualification for a European championship tournament, was the best performing British team, reaching the semi-finals.

This performance has increased sales of Wales replica shirts through JD Sports, which has an exclusive kit deal with the Football Association of Wales.

UK market values
The replica football shirt market was valued at over £250 million in the UK during the 12 months to March 2016, according to NPD’s Online Consumer Panel.

The replica market in the UK is bigger than the market size of France, Germany, Italy and Spain combined.

The football boots market was valued at over £200 million in the UK during the 12 months to March 2016, according to NPD’s Online Consumer Panel.

The sector was dominated by the same brands as in the replica market (Nike, adidas and Puma) during Euro 2016 - only two goals were scored by players not wearing one of these three brands.

The majority of players wore Nike during the competition and most of the goals were scored by players wearing the brand’s boots. Overall, Euro 2016 has definitely been a successful competition for Nike.

How will Coronavirus change the way Britain exercises?

Get your FREE digital subscription! Sports Insight is available on your mobile device

How will Coronavirus change the way Britain exercises?